Lilyanna D’Amato (OC’ 22 — she/her/hers) is spending her time in Ohio daydreaming about becoming a big time music journalist! Originally from Washington, DC, the Oberlin College sophomore spent her summers in high school attending summer programs at the Interlochen School for the Performing Arts and the Berklee College of Music, where she furthered a love of songwriting, music production, and performance. At Oberlin, she has moved away from performance in favor of ethnomusicological research and music journalism, heading the WOBC Blog, reviewing some of her favorite albums and attending and reviewing various on-campus concerts. Now a Comparative American Studies major, she hopes to combine an interest in cultural analysis with music journalism by exploring the different ways in which communities rely upon music to form and solidify a collective identity.

Cole Johnson (OC ‘23 — he/him/his) is first-year from Boston who started building a music library from stacks of CDs he found in his parents’ attic. Though his initial musical palette included almost strictly blues and classic rock, he has since found a wider variety of material on the internet, exploring hip-hop, rap, jazz, and ambient music. He plays guitar, drums and bass, and recently constructed a bass guitar for his winter term project. These days, most of his listening time is dominated by his friend’s list of several dozen album recommendations. He’s looking to get more musically involved this semester in journalism, active listening and playing, though ultimately his goal is just to get up off of his ass. When he’s not doing music, he’s probably ice skating, playing Earthbound, or writing this biography at 2am. 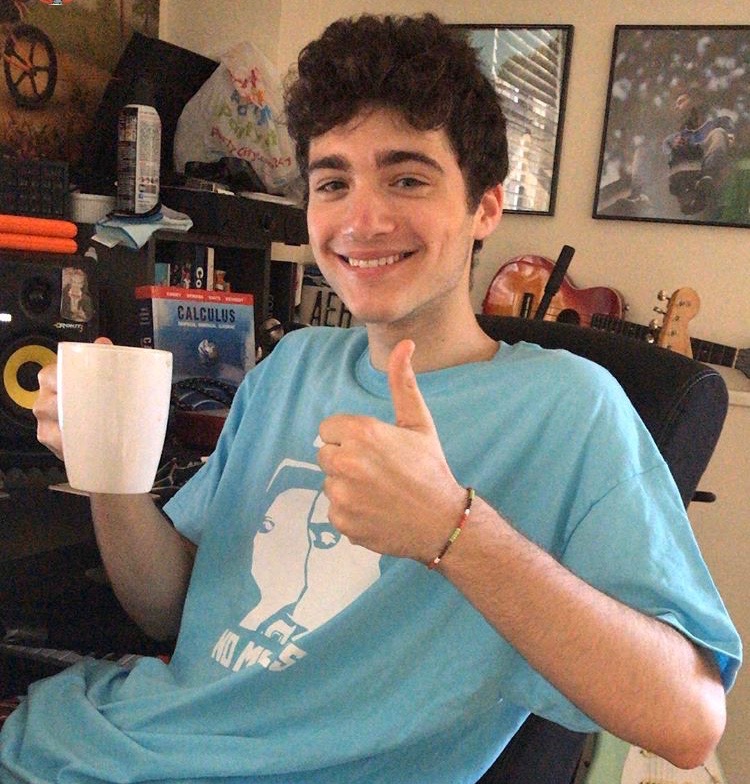 Jason Kreloff (OC ’22 — he/him/his) is trying his best to keep one foot in the music community of New York City as he attends school. A producer and audio engineer, Jason has been working for years with rapper “Gosha Guppy,” also known as Zach Bernagene. Jason enjoys spending countless hours mixing, mastering, and fine-tuning even the smallest details of music he creates. Ever since Zach blessed a Jason beat with his voice in early 2018 in order to create the song “A Beautiful Day to Get Robbed” which now has over a quarter million streams on Spotify, the two have been putting in hours and hours of recording work whenever they link up in New York. At the moment, Zach and Jason are currently sitting on a new album, which will be released soon. In his free time Jason likes playing video games, drinking coffee, working with other artists, and listening to as much musical content as he possibly can. He also releases music under the name “Jason to Me.”

Megan McLaughlin (OC ’21 — she/her/hers) is something of a go-getter. Originally from Ann Arbor, Michigan, Megan is currently a third year pursuing her Bachelors in Music at Oberlin Conservatory studying Horn Performance and Musicology with a minor in English, and is thrilled to be writing for The Critical! At Oberlin, she writes about her life and experiences for the student admissions blogs and does layout editing for the campus science publication, The Synapse. As a performer at Oberlin, Megan most recently played with Students for Gender Inclusivity’s Phlox Orchestra, and is currently playing with the Marrowstone Memorial Brass Quintet and the Oberlin Wind Octet. Megan enjoys drinking coffee, wearing loud shoes, and loitering in the Clarence Ward Art Library.

Damani Malcolm (OC ’20 — he/him/his) is finishing his senior year at Oberlin College. Bapestas, tacos, carpentry, big dogs, and the beach are some of his favorite things, and the NBA, Black Panthers, Liverpool FC, and Friends of Adeline are some of his favorite organizations. He studies Politics and Africana Studies and loves Black art, spending most of his time listening to Black music including Jazz, Hip Hop, R&B, Motown, Funk, Afrobeat, and experimental and ambient music. Some favorite artists include Parliament, Alice Coltrane, Future, Kendrick Lamar, Madlib, D’Angelo, Patrice Rushen, Herbie Hancock, Erykah Badu, and WizKid. Damani edits the Arts and Culture section of the Oberlin Grape, focusing on covering auditory and visual art and interviewing musical acts that come through Oberlin to perform in both school venues and off-campus shows. He is interested in writing as a means of building archives, and music as a catalyst of community.

Amari Newman (OC ‘20 — he/him/his) is a fourth-year Politics Major and Africana Studies Minor. Growing up in Uptown, Washington, D.C. he was surrounded by musicians of all shapes and sizes who were often the same age. Since arriving at Oberlin, Amari has become highly involved in organizing events and concerts throughout the entire campus. A proud member of the Oberlin Hip Hop Collective, Amari is also involved in other event-scheduling organizations including the Student Union Programming Committee (SUPC), Solarity, and WOBC. He is also one of the founders of the illustrious SleepWalker Entertainment Collective, publishing various works in The Grape and the WOBC Blog on behalf of the group, and piloting them to their 4th season of SleepWalker Radio. He is currently completing his final semester at Oberlin and is looking to take advantage of every resource at the College before he departs.

Maisie Sheidlower (OC ’22 — she/her/hers) loves all things raunch, rhetoric, and revolution. A New York City native, she enjoys blues, classic rock, big band, country, and gospel music. Maisie is currently a copy editor for Oberlin’s The Grape, and was co-head of her high school’s radio station, for which she hosted the show “To Impress Your Girlfriend’s Dad.” She experimented with a number of instruments in middle school — strings, brass, and percussion, but turned her attention to (initially non-musical) writing in high school, and found that to be her true passion. In her free time, Maisie enjoys making playlists, adding to her list of overheard sentences, and listening to audiobooks. She would like to credit both of her parents for their music influence. Find her on Spotify as “maezii.”

Tyler Smith (OC ‘22 — he/him/his) is a percussionist from Allentown, Pennsylvania, specializing in contemporary, experimental, and improvised music. He currently studies with Michael Rosen, working towards his B.M. in percussion performance. During his time at Oberlin, Tyler has been involved in such projects as the TIMARA 50th Anniversary: Kaleidosonic Music Festival, as well as performing in world premieres by Henry Threadgill, Elizabeth Ogonek, and Rachel Peters. He has also had opportunities to work and perform with such artists and ensembles as Zooid, Fillipo Lattanzi, and Matilda Hofman. Besides his passion for classical and experimental music, Tyler’s music preferences generally fall in the realm of jazz, r&b, and electronic. Although he enjoys all genres and is always striving to discover more.

Quentin Zimbalist (OC ‘21 — he/him/his) has strong, often stern opinions, likes to stay open-minded about unfamiliar topics, and is probably the reason there is no more beer in the fridge. Quentin studies Economics and music and serves as the liason to the Student Union for the Oberlin College Concert Board. Through this position, he has booked, promoted, and overseen numerous shows across a variety of venues on campus. Quentin’s passion for music shines through his weekly radio show on WOBC where he highlights hip-hop music from states not regularly associated with the genre. He expresses his musical opinions in various online forums, and through his affiliation with the Sleepwalker Entertainment Collective, an on-campus clique that publishes op-ed pieces in different publications throughout the year. He welcomes discourse in the comments of his reviews.

Daniel Hathaway launched ClevelandClassical.com in September, 2008, after a thirty-one year tenure as music director of Cleveland’s Trinity Cathedral, where he founded the Wednesday Noon Brownbag Concert Series and Trinity Chamber Orchestra. A graduate of Harvard College (A.B. ’67) and the Episcopal Divinity School (M.Div. ’71), he also pursued graduate studies in historical musicology at Princeton and Harvard Universities. Before coming to Cleveland in 1977, he served as head of humanities at the Sunset Hill School in Kansas City and as head of arts at Groton School in Massachusetts. In Cleveland, he has served on the music staff of Cleveland Opera, Great Lakes Theater Festival, and the faculty of Laurel School. As an organist, Hathaway has played recitals in the U.S., England, France, Germany, and Austria. He team-teaches Music Journalism at Oberlin College and Conservatory and is a member of the Music Critics Association of North America. (Photo: Tanya Rosen-Jones).

Mike Telin serves as Executive Editor at ClevelandClassical.com. and has spent his life immersed in Northeast Ohio’s classical music scene, first as a member of the Akron Youth Symphony. He received his musical training at the Oberlin Conservatory, and went on to perform as a bassoonist with the Canton Symphony, Akron Symphony, Cleveland Chamber Symphony, and Trinity Chamber Orchestra. He served as Executive Director of Music & Performing Arts at Trinity Cathedral for fifteen years during which time he co-authored many papers that focused on the intersection of art and community in Cleveland’s Central neighborhood. In addition to his work at ClevelandClassical.com he team-teaches classes in Music Journalism at Oberlin College and Conservatory and has recently contributed articles to Early Music America, Classical Voice North America, Symphony Magazine, and CAN Journal.